The free before the liberation

On April 23, 1876, the chairman of the Perushten Private Revolutionary Committee, Petar Bonev, a comrade of Levski since the First Bulgarian Legion in Belgrade (1861-1862), read the "bloody proclamation" written by Todor Kableshkov to declare the uprising. The members of the committee and the conspirators happily began to hug, kiss and shout "Long live Bulgaria!". As soon as they seized the weapons, each took the place assigned to him by the Committee in the respective positions - the "tabies", who surrounded the village, with which the Peruvians intended to resist the Turkish army, which would soon surround them everywhere. In the church "St. Archangel Michael ”stored the food that the women prepared during the last week, and in the walls of the church“ St. Athanasius ”on the hill broke through loopholes and turned it into a fortress to guard the road from the Muslim village of Ustina.

Spas Ginov, born in 1848 in Perushtitsa

Bones of Apriltsi, exhibited in the church "St. Archangel Michael” in 1936
Kocho Chistemenski was born in 1840 in the village of Dinkata

The lion that the rebels wore on their hats

From Saadullah Bey's report on the events of April-May 1876

The sarcophagus with the bones of those killed in the church "St. Archangel Michael” in front of the survivor of the altar of the church 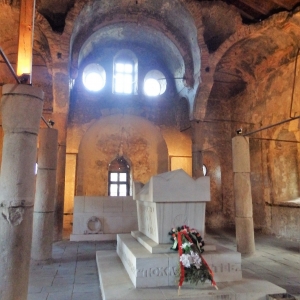 Kocho Chestimenski, born in the village of Dinkata in Pazardzhik and a member of the Plovdiv Revolutionary Committee, founded by Vasil Levski in 1869, then arrived in Perushtitsa from Perushtitsa. mass fires in Plovdiv - set fire to his shoemaker's shop, so he and his wife and daughter left the city. He was a trusted man of Spas Ginov, the right hand of Peter Bonev in the preparation of the uprising as a member of the Committee and its treasurer. Spas's father was a very rich man, one of the princes of Perushtitsa, and - eager to pass on his inheritance to his only son - he married him at the age of 15, so the young Ginov welcomed the uprising with six children and a pregnant wife. Nevertheless, he generously donated money not only for the supply of weapons and gunpowder in Perushtitsa, but also helped Benkovski to arm the Hvarkov detachment.

The conspirators assigned Petar Bonev the main command of the insurgents, and appointed Spas Ginov and Kocho Chestimenski as his first assistants. The defense of Perushtitsa was led by a total of six tabias, distributed around the village according to the places where their enemies expected to approach. Their armament was not enough, so they cut the barrel of a homemade cannon from a wild cherry. In addition to the women kneading bread, cooking and carrying water, the brides and grooms cut their hair and wore bows to help the positions by delivering food and ammunition. Sometimes Nikola Gichev gathered them as in a combat formation and marched with them to mislead the Turks about the size of the insurgent army.

On April 27, Turks and Poturnans from the neighboring villages of Tamrash and Ustina surrounded Perushtitsa on all sides, after first robbing and setting fire to the monastery of St. St. Theodore Tyrone and Theodore Stratilat ”on the mountain slope. Soon a battle broke out near the tabia. The insurgents bravely repulsed the beastly and bloody Bashibozuk breed. But new Turkish reinforcements arrived. Rashid Pasha also came with a regular army and began to sweep away the fortifications of the Perushtitsa defenders with cannon fire. Then 600 people, mostly women and children, hid in the stone church "St. Archangel Michael ”by the river. There is a fountain in front of it, but anyone who tried to reach it was shot by the Turks. With fierce battles in which Peter Bonev died, the men defended every building and every yard. Subjected to the artillery shelling over the church "St. Athanasius ”, the surviving rebels in it were forced to retreat to the other temple to protect their families. The fighters pushed out of the battles in the village also gathered there.

The Turks focused their artillery fire on the church "St. Archangel Michael. The shells smashed the roof, grenades fell on the prisoners in the temple and dozens died. Rashid Pasha sent a parliamentarian with a proposal to stop the shooting, but the rebels did not accept. Satiated with the atrocities of the Muslims against everyone in their path, they did not believe that he would fulfill his promise of mercy. They were sure that men would be beheaded and children and women tortured and dishonored. Having made a vow before God to protect the faith and honor of their wives and children, the surviving warriors in Christ decided to be left with the only opportunity left to fulfill their duty to them. Spas Ginov shot his children Georgi, Dimitar, Ivan, Yordanka and Galina (a neighbor hid the biggest one between the sacks of flour and rusks - 12-year-old Rango), his pregnant bride Giurga. His sisters Lyuliana and Nikolina, as well as his niece Yagoda, asked him not to leave them, and then he ended his life. Ivan Tilev killed his young wife of God and his mother in law, who desperately asked him "for this mercy." When he turned to his three-month-old baby girl, Mariyka, they snatched his weapon and did not allow him to kill it. Furious, he ran outside to die in battle with the non-believers and was shot in the temple yard. Gocho Mishev shot his wife Velika, his child Atanas and finally himself. Kocho Chistemensky shot his daughter Raina, his wife Teohana and a girl, a relative of his, who also wanted to save her as his daughter. Eventually he shot himself, and the others around him followed his bloody liberation.

Thus, as holy martyrs in Christ, 23 victims (according to the chronicler of the events Ivan Kepov) or 32 (according to the report of the commander of the combined forces of the army and bashibozuka Rashid Pasha) escaped new suffering. When the pasha invaded the church with his soldiers and realized what a feat had been performed there, he was astonished by the courage of these Christians and did not allow the bashibozuka to mock the survivors.

On May 1, Perushtitsa burned completely.