To the southeast of the sanctuary Manastirski skali, but even higher on the steep slopes of the Rhodopes, as a precipice of rock among the vast forest on the slopes whitens the Holy Place. I did not find a person who knows why he is called that in Perushtitsa. One thing was certain: if a hunter did not hit game in the mountains, so as not to go down into the city ashamed, he would come here and he would definitely get lucky. 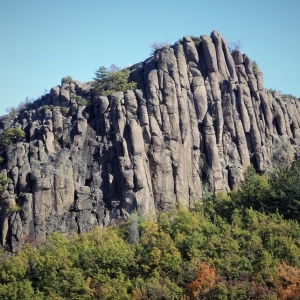 The huge figure of titanium assembled from oval rocks 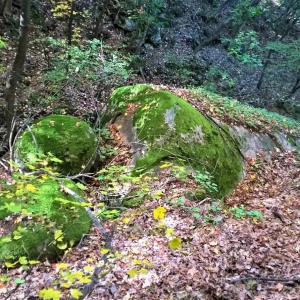 The whole Dragon, as it rises above the ritual platform of the priest

The secret dolmen and the "wolf" cave hidden in it 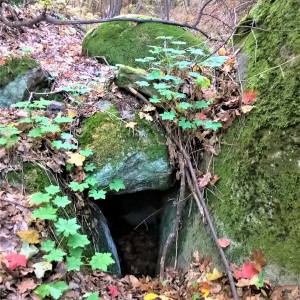 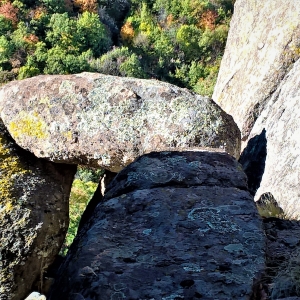 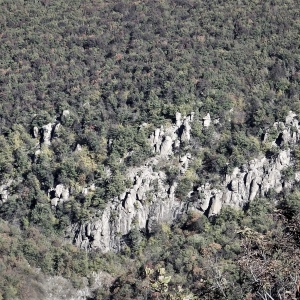 View of the sanctuary above Manastirski rocks 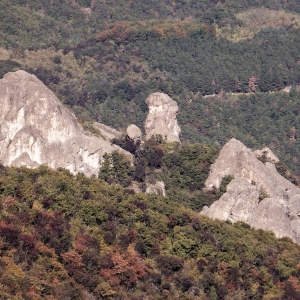 Suspiciously preserved niche, which seems to have been bypassed by erosion 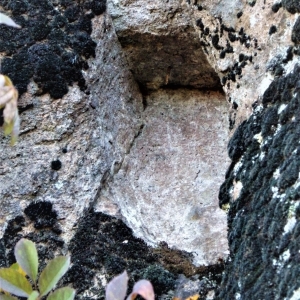 The majestic view from the foot of the sanctuary 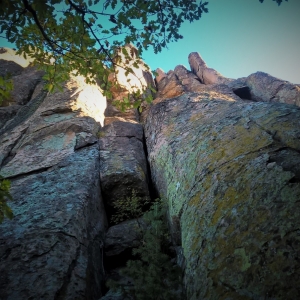 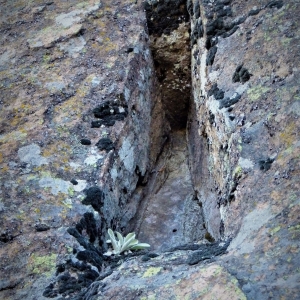 There are many places in our lands that are full of legends about the voluntary ritual sacrifice of a sacred animal, usually a deer. But these are legends from very old times and the fact that the sanctuary here has apparently been abandoned for a long time, speaks of megaliths that served ritual sacraments in ancient times. And here, of course, on the way to the rock sanctuary you have to cross the river that separates the sacred zone from the rest of the forest on the ridge. But there is something else that cannot be seen elsewhere: a huge titanium figure assembled from oval rocks.

This seemingly depersonalized figure is sprawled next to a dolmen, hidden like a small "wolf" cave for solitude in austerity - the sacrament of the initial consecration of the city before heading to the heights. The slope is very steep and a person gains height so fast that he will or will not put his breathing in the rhythm of the ascent. And the space is saturated with oxygen - the great natural bonus for anyone who walks through a beech forest - so you do not believe how soon you stand in front of a vertical rock wall.

Exposed to millennia of heat, rain and icy cold, it is now difficult to distinguish the places that have been treated on the rocks.

In any case, this work is hardly done in one fell swoop, because during the field tour of the megaliths with the director of the Historical Museum in Perushtitsa Assoc. Prof. Dr. Veselina Vachkova, she discovered three trapezoidal niches. Historians do not know how and why these mysterious "windows" were dug in the high parts of the huge rock massifs, but they unconditionally connect them with the mysteries of the Thracians. A few meters away, we still saw another similar niche from the foot of the rock massif, but with amazingly preserved edges. Didn't adherents of the ancient rites around the megaliths secretly continue the ancient magical practice even at a time when the Red Church was already triumphantly rising down in the field?

It is certainly left from ancient times, however, the dragon, which above, on the rock mass, guards the ritual site of the priest. Although it was cut in the most vulnerable place to heat and torrential rains, it is still not just impressive. Facing him in the super-sacred place for the magician, they make you shiver with the feeling that he seems to be able to come to life at any moment, and not out of joy that you have set foot there.

However, if you free yourself from the hypnosis of its millennial presence, you feel wonderfully elevated above the field, which is blurring low below in a slight trance; over the city with its petty vanity; over the countless waves from the ridges of the mountain, which seem to come up and ... pass to the height, which God knows why and since it is titled with the reverently significant name Peak. It is hardly a coincidence that the best view of the rock sanctuary Manastirski skali in the southeast is from here. At the same time - patronizing, in the back and too high. To the northeast of here you can see the hill with the mysterious name Dyadovo linishte. Lining is already a forgotten word for stripping the old snake skin, and apparently the respectful definition of the perfect initiate - grandfather - was not invented in the Middle Ages by the Bogomils. The rock peak at the very end of the elongated hill is called the Eagle Stone, and the snake-eagle tandem is a cosmic sacred symbol, which we see both on the coins minted five centuries BC by the Thracian king Sparadok, and also in the famous silver eagle of Khan. Asparuh and on the mysterious Bulgarian ark - the wooden chest, a gift from Prince Boris-Michael to the Vatican, which is now stored in the Italian city of Terracina. And behind the ridge and valleys, but to the southwest under the southern, precipice side of the rocky peak Orli Kamak, stretches a huge megalithic complex of two widely developed cromlechs. Unlike other shrines in the area, he was apparently forgotten even by treasure hunters when one of their most personal representatives in the city was surprised when we showed him the dozens of protruding menhirs in the far valley.

But the only thing we can say about the magical nature of this place now is that as soon as we noticed it, an eagle immediately flew over the Eagle Stone as if to personally testify that mysterious energy was hovering over the distant stone forest. (Was it the same bird that follows us and circles over us every time we walk around the sacred territories, or sacred eagles and so far they are laid on every megalith ?!)

Difficult questions weigh on these objects: what they are, what else can be seen up close and what forced them to be forgotten - to the point that even treasure hunters do not dare to visit them. But, following the wolf mysteries of our ancient dedicated ancestors, let us not forget their warning that the fast bitch gives birth to the blind.