The spiritual temple next to the temple of Salvation

“We, fascinated by our private interests and enchanted by our internecine riots, leave not hours, but whole years to air without working for our progress. In our country, everything falls into enmity, instead of doing our job. And that's why we can't and have nothing.“ 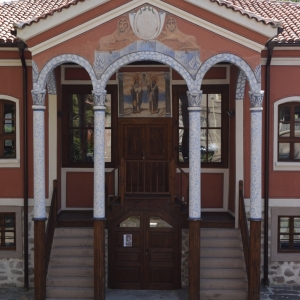 The exhibition hall in the basement of the school

The exhibition hall in the basement of the school

Literature from the school library

In 1850, the people of Perushtitsa built a representative building for their children's school. Worthy of him, as the first teacher invited Hristo Danov (1828-1911) - famous for his literary and publishing activities in Revivalist. For his three-year patriotic service in it, he managed to prepare the future figures of education, church affairs and the national liberation movement in the prosperous settlement. That is why in history it remains as "Dan's school".

The school "St.St. Cyril and Methodius ”, or the so-called Danov School in Perushtitsa, was built by masters from Pazardzhik in 1850 in the yard of the church“ Holy Archangels Michael and Gabriel ”with the materials left after its completion and with the voluntary work of the people from Perushtitsa. As an architectural style, the building belongs to the so-called "Plovdiv symmetrical house" with a beam structure. The mixed construction gives stability to the construction and protects the building from collapsing and burning during the fighting in April 1876. The color of the facade is influenced by the Orient and has the symbolic meaning of a humanitarian building.

The columns and other architectural elements painted on the façade in the interior in the style of "alafranga" are defined as the typical for the Renaissance decoration of public buildings and rich homes. On the pediment and above the door under the covered entrance you can see two mural compositions with stylistics close to that of the Samokov school (construction of a spatial composition, stylistics of the images, attitude to the silhouette). The first mural represents two Dormantian lions, corresponding to the nationality of the building and its humane orientation. The field above the front door on the second floor depicts the holy brothers Cyril and Methodius holding a scepter, a symbol of spiritual authority, and an open book with the opening phrase from the Gospel of John.

Until 1850, the children in Perushtitsa studied reading, writing, psalm-singing and the Law of God with the local priest (Kostadin Penov), or the more enlightened people. (Kostadin Rachev gathered students in his home as early as 1750 and taught them to read and write. Stoyan Bakal-Nikolov opened a school in Nikola Kanev's home at the end of the 18th century). Some of the parents sent their children to the monastery "St.St. Theodore Tyrone and Theodore Stratilat ”four kilometers in the mountains, south of Perushtitsa. (At the end of the 11th century at the foot of the Rhodopes were built eight Christian monasteries by the will of Emperor Alexius Comnenus, which during the Turkish rule were the mainstay of both the Orthodox faith and the Bulgarian identity. The abbot of the monastery Father Leontius owned transcript from "History of Slaven Bulgaria" by Paisii Hilendarski and his students had the opportunity to learn about the history of their homeland).

The teacher and his followers

"They lived quite comfortably and no one owed anyone anything. With the exception of 15-20 Perushtani, former pop students, who in the beginning of July 1850 were engaged in groceries and pubs, all other peasants were illiterate. In practice, it turned out that a mediocre level of education and training satisfied their understandings and needs, because the desired "comfortable daily life" was the result of the well-being of their agricultural work and merriment. "

Hristo Gruev Danov, who is considered the patriarch of Bulgarian book publishing and book distribution, taught in Perushtitsa for three years - from 1850 to 1853. He introduced secular blended learning based on the mutual learning "Lancaster method." All classes were conducted in Bulgarian. The subjects studied coincided with most of those in Western European schools, but there was no lack of basic religious training. Girls were also admitted to education, something unusual for the middle of the 19th century in enslaved Bulgaria. European education helped people develop their trade relations and marketed their rich production of wine, bubble seeds, tobacco and gul throughout the Ottoman Empire and in European countries. For many years after leaving Perushtitsa, Hristo G. Danov supported the educational process with his own funds and contacts with prominent figures of the Bulgarian education such as Naiden Gerov and Joakim Gruev. He radically changed not only the level of knowledge of the Peruvians, but also their self-awareness as Bulgarians and Christians. That is why the school remains popular today as "Dan's school".

After 1853, the following people also taught at the Dan school: Dragan Manchov - The Grandfather (later also a publisher of fiction), Petar Bonev (a student of Hristo G. Danov and later leader of the uprising in Perushtitsa), Dimitar Lachkov (the first ethnographer and publicist of Perushtitsa), Father Stoimen Atanasov, teacher Bota Boteva and many others.

Since 1862, the building of the Dan school also functioned as a community center "Petar Bonev". During the April Uprising, part of the roof of the Dan School collapsed due to the detonations from the artillery shelling of the neighboring temple. The English journalist Lady Strangford (a convinced Bulgarophile) visited our country in August 1876 as a member of the European Commission of diplomats and representatives of the Turkish government. With £ 30,000 raised from donors in England, she restored the building and turned it into a hospital. From November 1876 to April 1977, about 150 people who survived the uprising were treated for typhus and dysentery.

In the years around the Union (1885) a military garrison was housed in the Dan school due to the border function of the village. In 1930, the ground floor was used as a cinema with a stage for theatrical performances. It was not until 1969 that the Dan school acquired its original appearance. The roof layer of white plaster, placed immediately after the April Uprising, was removed, and the frescoes and alafranges were restored.

In 2015 the building was completely renovated according to a European program and took over the function of a museum and art gallery. On the second floor on the right is a room with desks and teaching aids from the period of Dan's training. In the central part are displayed information boards with texts, photos and materials from the same era. On the left is the municipal room, in which Petar Bonev established the First and Second Private Rural Revolutionary Committee in 1869 and 1876 with the help of Vasil Levski and Georgi Benkovski, respectively.

In 1969, as director of the Historical Museum in Perushtitsa, Dimitar Stanchev established a fund "Art Gallery" with works by Zlatyu Boyadzhiev, Dimitar Kirov, Kolyu Vitkovski, Encho Pironkov, to the existing history, archeology, ethnography and library. Since then, temporary and guest exhibitions of valuable Bulgarian authors such as Prof. Dobri Dobrev, Yordan Velchev, Vihra Grigorova, Svetlozar Chavdarov, Eli Stancheva, Nikola Dikov, Evgenia Panchova and many others have been organized in the designated three-part hall in the basement of the Dan School. who create in different genres and techniques of fine arts. The works of art donated by them replenish the fund of the museum and enrich its collection.

In 2018, the collection of the Historical Museum was supplemented with 23 lithographs from AD. Hristo Neykov, provided free of charge by his successor Neiko Neykov.