In April 1876, Azis Pasha had no troops. That is why he resorted to all means to deceive and promised the rebellious Bulgarians until any military force arrived. 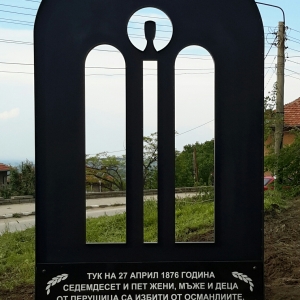 For this reason, he reassured the Perushtin chorbadjii and on April 27 appointed and sent to Perushtitsa a commission to reconcile Perushtans with Ustins and Pomaks. When they arrived in the village, the church and all the outbuildings of the monastery "St. St. Theodore Tyrone and Theodore Stratilat" were already set on fire.

After negotiations, about 480 people agreed to surrender as collateral. The elders of  Perushtitsa, in their naivety, were convinced that by this action they would appease the chiefs and save the settlement from captivity and fire, and the inhabitants from logging. A whole line of women, children and men were taken to Ustina, but as the agreed number was not enough, they selected a second group of about 200 people and took them to the gypsy mound "Pazlaka".

"Three times the captives were hurled from the road to the fields, shot and slaughtered mercilessly. The children of many mothers were torn from their hands and cut with scythes before their eyes. A whole precipice was covered with corpses of men, women and children. about 75 people fell, and those who managed to escape had their noses, arms and legs cut off and left to suffer until the caddis came to stone them. " (after Ivan Kepov)

In 2016, on the occasion of the 100th anniversary of the uprising, a monument was unveiled in this area, the author of which is the sculpture Svetlozar Chavdarov. (He was born in Plovdiv in 1963. He graduated from an art high school and a master's degree in sculpture. He also studied professionally in the studio of Academician Alexander Dyakov and specialized in sculpture in Austria.) The monument on the Pazlaka area is named Angel.. It is made of low carbon steel and its size is 2.90 m.