The icon that "came out" of the fire

A landmark in the museum's exposition is the icon of the holy silversmiths and doctors Kozma and Damyan from the monastery "St. St. Theodore Tyrone and Theodore Stratilat ”over Perushtitsa, which miraculously survived after in April 1876 the bashibozuk hordes of Muslims and gypsies from the area burned the holy monastery before advancing on an insurgent settlement at the foot of the Rhodopes.

The painter who painted the holy images remained unknown. The miracle of how this wooden icon was not engulfed in flames in the completely incinerated holy monastery remains unexplained. On the other hand, curious legends about other amazing events with such sacred relics have been preserved, and it is good to retell them until they are "found" with their brave explorer, who will decide to study the phenomena.

In one of the legends it is not clear whether his "hero" is the same icon, but he is definitely from the same holy monastery. It was written in his youth by Prof. Mikhail Arnaudov, and he published it in 1930. In the Collection of Folk Tales, Science and Literature we can read in black and white that the "marten" flew out of the church and went to the stone where the cross is. They went to take her, but she was not given to anyone. However, a bride, married for two days, managed to take her and took her downstairs, to a flat place where the monastery is. There are now four steps on the horse of St. Todor. "

On the height just above the holy monastery and from the city to see the impressive menhirs of an ancient megalithic sanctuary, which later under the pressure of the Church had to be forgotten, and probably (as happened in many similar places in our lands) was beaten there cross. In any case, the locals continued to live in memory of the sanctity of the impressive rock complex, so they called it Monastery Rocks. Along with the previous story, Prof. Arnaudov has published another similar legend from the area: “Two hours away from Krichim there is a consecration place (monastery) in the name of St. The Mother of God, burned during the uprising of 1876. In this place shepherds and hunters heard many, many years ago that a voice was still crying. The voice came from a height above the river, where there was an iron cross. Bishops and priests went, read a prayer at the place and here the voice called from a dogwood. They surrounded this place and built a monastery there. When the feast of the church came (Introduction to the Mother of God), everyone flocked here and took part in the fight over who would grab the icon of the Mother of God and run through the hornbeams, without a road - because the icon drove them, pushed them (as if a hall was blowing them). They ran hard, and others chased them - until they all returned to the church. Some believe that the icon flew by itself and went to the cross, where the voice was heard before. She was usually chained to a dogwood tree in the middle of the church.

Anyone who is well acquainted with the area of Perushtitsa and the historical sites associated with its museum would not be surprised that under the influence of ancient magical sacraments there, even Christian relics succumb to non-canonical miracles. 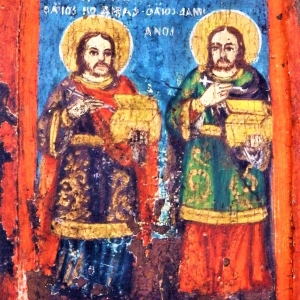 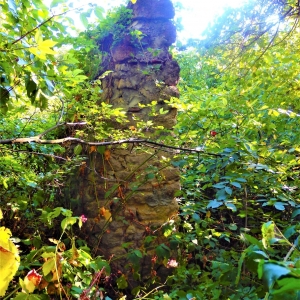