Bulgarian agricultural tools through the eyes of a traveler

The French doctor Pierre Bellon du Man (1517-1565) was a progressive scientist, one of the founders of the natural sciences and comparative anatomy in his country. Participated in many diplomatic missions, one of which took him to the Ottoman Empire, ruled at the time by Sultan Suleiman I (1520-1566). At the beginning of 1547 he arrived in Constantinople, from where he began his tour. Charged with the task of studying the economic condition of the Ottoman state, the doctor visited the islands of Lemnos and Thassos, Mount Athos, and later Thessaloniki. From there, by land, passing through Kavala and Silivria, it heads east - to Asia Minor and Egypt. He published his experiences as far back as 1553 in "Journeys in the Levant: The Observations of Pierre Bellon of Le Mans on Many Unusuals and Remarkable Things in Greece, Turkey, Judea, Egypt, Arabia, and Other Foreign Countries."

Of interest is his accurate description of agricultural implements (palamarka, sickle and dikanya) and the way the local Christians cultivate the land: “They have a special way of harvesting wheat, with greater dexterity than the French. Their sickles are also different because they are flatter, wider and toothless and less curved. When they reap, they hold them in their right hand, and in their left they hold a curved tree (palamarka), which is slightly swollen and pointed at the end; it has three holes for inserting the three fingers of the left hand, namely the little one, the second and the third one after the other. The thumb and forefinger remain completely free to grasp the wheat more easily. And as they open their hand and embrace the wheat, they cut a much larger sheaf. Then they do the wheat not with bats, as in our country, but with oxen. At the same time, the oxen drag boards piled with stones (dikans), which break up the straw and crush it… " 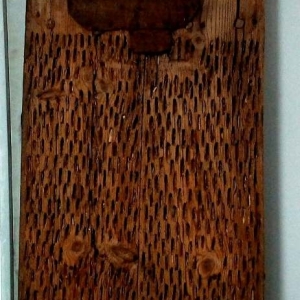