With her report "The Misunderstood Idea of a Forgotten Hero: Spas Ginov and the Self-Sacrifice of Perushtitsa" Mihaela Bozhilova brilliantly presented the Historical Museum in Perushtitsa at the international scientific conference "Heroes. Ideas. Events "in the town of Tutrakan, dedicated to the 245th anniversary of the victory of Generalissimo Alexander V. Suvorov in Tutrakan, 140 years since the Liberation of Bulgaria and the 120th anniversary of the Tetrakan publishing house" Mavrodinov ", which took place on June 7, 2018.

Mihaela Bozhilova at the international scientific conference in Tutrakan with Prof. Antonina Kuzmanova 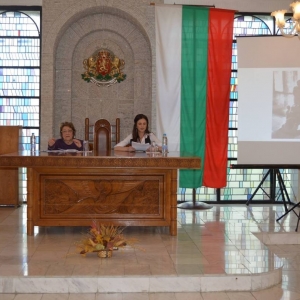