Home › Our tour › Assoc. Prof. Dr. Veselina Vachkova was invited to present the unique double sanctuary in the Teteven Balkans

Roads and images of holiness

The penetrating approach should be understood as a hereditary and creatively developed over the millennia tradition of construction, upgrading and worship practices in the sanctuaries in our lands, which Assoc. Prof. Dr. Veselina Vachkova adopted in the study and publicity of prehistoric, Thracian and Christian shrines in the region of Peru. , received a new significant recognition. As director of the History Museumin Perushtitsa she was invited to present on the Balkan Mountains the unique double sacred place - a mound and a meal - in the Bryazovitsa neighborhood of the village of Ribaritsa. Excited, moved and amazed by the erudition and enlightenment of their God-inspired guest of honor, the mayor of the village of Ribaritsa, prominent members of the local community and the glass of the event, pilgrims from the area were unspeakably happy to hear her word personally from Assoc. Prof. Dr. Vachkova:

"Bulgarian lands are dotted with mounds and rites. They keep ancient secrets and carry for centuries a longing to touch the afterlife. Usually both the mounds and the vows are "welded", ie. every local claims to have found them, he and his ancestors have found them. These monuments seem to have merged with the landscape, fit into it and delicately model its profile, concentrating the whole picture in itself. The mound, with its smooth curve, hints at the union of the earthly and the heavenly.

The symbolism of the mound and the rite create a completely new image if the two monuments are combined. Such is the case in Ribaritsa. Undoubtedly, the union in question speaks of an extremely strong cultural continuity, in which changes in religion, politics and economics do not affect the deep spiritual heritage. Thus, the mound here is from 5-4 century BC, built by local serdi (sardons) - a people who originally intertwined features of Thracian and Celtic culture. The cross-meal was placed over the mound 17-18 centuries later. Apparently the sanctity of the place has not been forgotten in all these centuries.

For non-specialists, placing a cross over a mound can have a number of pragmatic motives: for example, a cross erected on a kind of pedestal becomes particularly visible and dominates the surroundings. In other words, the combination could be understood as a declarative statement of the superiority of Christianity over the old religions. The truth, however, is different. The rites themselves in Bulgaria have encoded ancient ideas, including Christianity. Exactly this type of cross-meal has a deep root, which symbolically points to the center of the mound. What are usually called "shoulders" of the waist are actually called "wings". It turns out that the meal depicts a synthesized essence of human existence - inextricably linked with the earth and matter and steadily wanting to break away and fly over them. In this line of thought, it will hardly be superfluous to remind that the mountain around is called Teteven Balkan - a name that encodes the room power, tension and aspiration of the bowstring.

The saint to whom the meal is dedicated is also special: St. Elijah, the only mortal, along with St. Enoch, who was born but did not die, but was taken by God in heaven during his lifetime. Undoubtedly, in the image of St. Elijah and especially in his Bulgarian iconography, many features of the ancient Ellis, the Sun God of the Thracians, come to life. It brings to life, above all, that intimate connection between man and God, in which the Lord reveals Himself to His creation "not in the storm and in the thunder, but in the breath, in the breath of the still wind" (1 Kings 19:20). Ascending to heaven in a chariot of fire, St. Elijah is that bright symbol of the purpose of man, of whom the Lord Himself declares in the Bible: "I said, You are gods." (Psalm 82: 6)

Father Pavel, who consecrated the rite of St. Elijah, embraced the touched Assoc. Prof. Dr. Veselina Vachkova with the words:

According to Orphic tradition, no blood sacrifice was offered for sacrifice, and a fish was consecrated in a Christian way on the table with which the significant day was honored.

In turn, the holiday provided an unforgettable opportunity for Assoc. Prof. Dr. Veselina Vachkova to establish fruitful contact with the Historical Museum in Teteven for exchange of information, creative interaction in research and exchange of exhibitions. 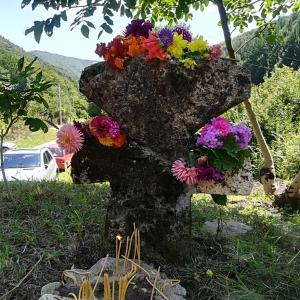 When the director of the Historical Museum in Perushtitsa spoke at the holy place, even the priest respectfully stepped aside. 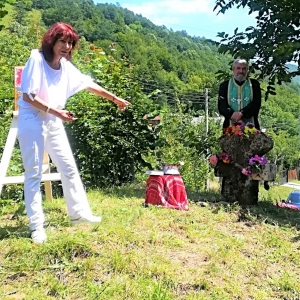