Why one day has become Ignazhden

Instead of wasting Boyle time each winter discussing which days to celebrate and when to work, our wise ancestors once seemed to have resolved the issue by simply excluding dates from December 21st to 24th in their famous ancient calendar. Leaving this time to complete the promised deeds, one has to take stock of what he has achieved during the year and whether this is exactly what he needed… In short: the people had to prepare for the coming New Year, because it fatally occurred with a cosmic miracle over a an extremely exciting human-divine mystery.

It is not entirely clear whether in this case all three special days merged into One Day, but in any case at least the first of them was announced by that name. From there until December 24, the sun visibly rises from the same place on the horizon. On the night before the 25th, however, a cosmic miracle takes place in the sky: the three stars of the Orion belt in the constellation of the same name line up with the "dog star" Sirius, and if one mentally continues it down to the horizon, one will know exactly where the Young Sun appeared, one degree further north.

Tips from our dedicated ancestors

This day was extremely important for our dedicated ancestors. And not just in their "wild" antiquity. The Thracians dedicated magical symbols to him, which they probably put not only on horse harnesses, but also wore them as amulets. See one of the Mogila mounds in the middle of Vratsa: in the center of the silver circle under the open mouths of three wolf heads the almost eaten Sun is already beginning to gain strength and the three wolves are rejected to circle with gloomily bowed heads on the periphery of the sacred space. Yes, from Christmas to Vodice (January 5) are the "pagan days" in which not only wolves roam the Earth hungry, but the souls of the dead are set free from their villages, so they set off from the villages with naked swords in their hands. Rusalian gangs of young men to watch for the invasion of evil spirits from the portals through dried up wells and at crossroads…

Perfect among the Bogomils - as heirs of the ancient initiates, who carried their Knowledge even in the Middle Ages - suggest the cosmic mystery of Christmas and its earthly manifestations as their significant stone Monuments of Revelation (called in Bosnia and Herzegovina "stechki", depicting a hunter with a spear who stabs a deer. The hunter, of course, is the mythical Orion, the deer is a primordial symbol of the earth's solar manifestation, and the "dog star" Sirius is reminded of their mysterious wolf manifestations, for which they left testimonies as Liutprand of Cremona Otto I with a diplomatic mission in Constantinople during the time of Boyan the Magus) and the prominent Byzantine theologian Euthymius Zigavin (about their time and deeds around Basil the Physician)…

What if it's too early to give birth on Christmas Eve?

But the oldest clues to the primordial Knowledge associated with the day of the Young / New Sun are the ancient caves-wombs, in which the first ray of the sunrise at Christmas penetrates to their sacred bottom to impregnate the Great Mother Goddess in the sacrament of Divine Marriage (hierogamy ).

This leads us to the reasons that imposed the sacred fasts with a vigil on Christmas Eve - then the king-priest in turn began this sacrament with his assigned bride. As a goddess, she was chosen as his fiancée among the consecrated virgins in the last round of women's mysteries from November 11 to 21, remembered as the Wolf Holidays. In this sacred ritual, the two were to present themselves as worthy to embody the cosmic fertilizing sacrament on Earth, so that the year would be fruitful and thus assert their right to impose and uphold the Lord's will as followers of His supreme providence.

(And how important it was for everything to happen to them as it should be can be seen in the priestess, who watches and helps them if necessary - on the silver plate from the Summer Treasure, for example, her assistance is documented with a suitable aromatic licorice.)

The church is a caring mother

But for most people, this can be too annoying knowledge. That is why the Church saves us by quietly moving the unforgettable One Day to the 20th and calling it St. Ignatius Day. The play with close names was obviously intended to cover up something very special that happened at the beginning of this magical period, and the folk memory connects it with the Attendee. But since it is customary for the ignorant to guess at the first person who enters the house whether the year will be good and generous, isn't the suggestion close to the mind that on this day the new king-priest was introduced to his assigned bride for the role of The great mother goddess in the upcoming rite ?! Well, what can we talk about, since after the people there is a custom for the attendant to enter the house with a stick and use it to dig the coals in the hearth. Both clear and delicate, but also an elegant message!

An echo of the erased meaning of the rituals on this day is the belief that if a girl puts her Enyov wrist in the fire in the evening, she can see the face of her future husband there.

However, the reasonable covenant remains: on the chair where the attendant was sitting, then put a head of garlic - the universal remedy against magic, the devil and a cursed man in your heart. In order not to be offended by a bad attendant, in some homes he lets a child enter the house first - both clean and with a future! And the Church has taken this into account as well, so after the universal baptism it has named the day of St. Ignatius the Godbearer - the child that Jesus Christ raised in His arms…

Big Dipper the night before Christmas

2. Silver medallion-amulet from the IV century BC. with the New Sun

3.Mogila's treasure Bogomil medieval monument in Bosnia with a symbolic scene of the Hunter (Orion), aimed his spear at Elena as a sun symbol.

4.Tile with gilding from the IV century BC  with a scene from the ritual sacred marriage of the king-priest with the consecrated chosen one 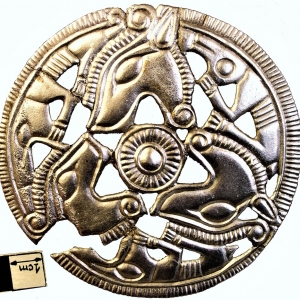 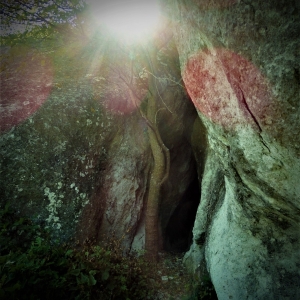 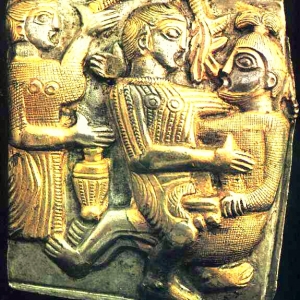