Home › How to make a story with a magnifying glass in hand › Whose resurrection overlaps Lazarus day?

A strange custom on Lazarus Day seems to have been forgotten, in which girls and boys gathered at the home of the best and most beautiful bachelor to "make" him a corpse. As they decorated his coffin with cuckoo, his comrades carried it through the village, and the girls mourned it. So they took him to the spring below the village and there they sprinkled him with water. Then he "came to life" and all the merry ones returned to dance in the square in the middle of their village...

You think this has to do with the resurrection of Lazarus, don't you? But the scientist from the Faculty of Theology at Sofia University "St. Kliment Ohridski ”Professor Dr. Archimandrite Evtimii in his study“ Folk Beliefs, Rites and Customs (Materials on the History of Religions) ”, which he published in the Yearbook of our Alma Mater for 1943, commented on the custom in connection with rites around Persephone, Osiris and Isis. The professor-theologian correctly wrote that the rite was performed "so that the weather would be good all summer long." It sounds naive, but if we dig deep and deep with the intellectual spatula through the layers of thought in the legend, we will find clear traces of the amazing mystery of the Thracian king-priest of the northern Getae who lived in the late VI or early V century BC. Zalmoxis. As he revealed the secret of immortality to his devoted listeners in the specially built hall and instructed them that death would have no power over them, he entered the tomb prepared for him in the meantime and ... only "on the fourth he appeared to them again and so they believed what he told them, ,,concludes Herodotus, his contemporary, about the sensational event.

Mythically, 6-7 centuries before Christ, the famous zealous follower of Orpheus repeated the "descent" of the Brilliant Thrace into the "afterlife". But Zalmoxis obviously had no reason to save a Eurydice. He hardly did it as a show for his listeners. It was definitely a dedication ritual, and judging by our church calendar (which usually imposes Christian ritual holidays on the ancient special days for the mysteries of the ancient magicians!) Lazarus Day is around the first spring full moon, probably in this maiden rite. we hear an echo of a lunar initiation to transcend the three earthly dimensions.

It is tempting to assume that this is also the case in the miracle of the resurrection of Lazarus, when in his Holy Gospel John emphasizes how Jesus did not go at once to save from death the brother of Mary who anointed him with oil, but went to her on the fourth. day!

It would be good if one day our archaeologists discovered the "tomb", which 6-7 centuries BC was specially built for the sacrament of the glorious Goth king-priest Zalmoxis - it would tell us what inherited from it the later burial temples of the Thracians, where similar mysteries have been stubbornly perfected.

2. Supposed image of Zalmoxis on a ritual jug from the 4th century BC. in the Borovo treasure 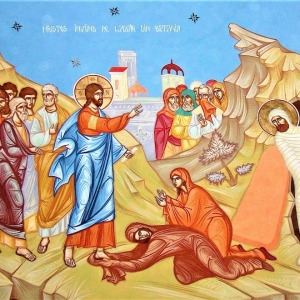 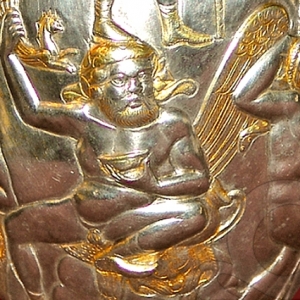