The famous Constantinople theologian from the end of the 11th and the beginning of the 12th century Evtimiy Zigavin describes the curious story of the perfect Bogomil Peter, "a worthy successor of Basil the Physician", who in southern France ordained bishops among the followers of the Bulgarian Bogomils when fanatical Roma stones and he promised his disciples to be resurrected in three days. Although the Roman author is famous for his anti-heretical writings, it is in the most famous of them - commissioned by the Byzantine Emperor Alexius I Comnenus "Dogmatic Weapons"(Πανοπλία δογματική), who probably invited him to keep (secretly?) Notes from his meeting with the legendary Bogomil leader Vasily Vrach, - ends this story with: "they really waited at his grave to be resurrected" and "Peter really appeared to his disciples after his death, but ... under the image of a wolf he jumped out of the stones. After quoting him, Raycho Karolev himself (the first Bulgarian researcher of Bogomilism) in 1871-1873 pointed out that "we can guess about the nationality of this heresy leader and his students."

Much better known is the report to the German emperor Otto I of the Cremonese bishop Liudprand in 949 from Constantinople about the fourth son of the Bulgarian king Simeon the Great - Benjamin as "strong in magic, magic and secret charm to the point that man became a wolf" . Of course, we are talking about Boyan Maga - the youngest Bulgarian prince at the time, trained at the famous Magnaur School.

Both cases involve men who went through the wolf mysteries of the ancient magicians in our lands, who developed the ability of initiates to live in both the visible and the invisible, to pass through the dimensions that physicists have only just begun.

This transition has always been a top secret

But a breakthrough still occurred. And he still lives among us in a very strange way - as an imitative rite of wolf mystery with dogs, which in ancient times have replaced in a number of magical rituals wolves as their "brothers". The fact that the custom has survived to this day reveals how emblematic it has stood in the whole system of initiation sacraments. It is no coincidence that it is associated with the ritual fasts with which the mystics proceeded to their sacraments, and it is natural that even now they most zealously follow it in the sacred mountain Strandzha - the area that remained "wolves", where the old priest dances performed under the blows on the wolf skin of the drum.

Even five centuries after Christ, the Astians in the easternmost part of Thrace between Apollonia (Sozopol) and Byzantium (Constantinople) followed the mystical cult of the Goth priest and king Zalmoxis (witnessed by the lexicographer Hezekiah). The name under which the custom inherited the ancient sacrament -

- leads to the story of Harmidas recorded by Plato. In it, the Thracian tells the sage Socrates how the same Zalmoxis taught his people to begin healing by first restoring the cosmic harmony in the soul of the sick and then to heal the sick organ with the usual techniques ...

The ritual is performed on Pure Monday on the first day of Lent before the vernal equinox. Probably the ancient initiates swirled the mysteries on February 1, 2 and 3, when in the folk memory these Wolf Holidays are remembered as Trifunci. Magical renewal / healing presupposed mediating abilities both between the heavenly and the earthly, and between the basic elements that make up our world. We also know from the physicist Nikola Tesla that "our entire biological system, the brain and the Earth itself operate on the same frequencies," but our dedicated ancestors learned that the perfect

Synchronizing man with the harmony of cosmic energies

the universal mediator, the wolf, can help. This is the easy explanation why the people who in ancient times waited in front of the sacred cave to find out what would happen inside with the magicians, saw a wolf coming out ...

Perhaps the wolf sacrament came out of the secret chambers of the supreme magicians when the churchmen destroyed their sanctuaries at the beginning of our era. Perhaps the initiates returned to the ancient services of the ancient priests before their people to protect them from the new faith, for whose glory they destroyed their ancient sanctuaries. The dog is a guard and companion, so it easily accepts the mediating role of the totem beast. When the rite has established itself as healing ("running"),each landlord wanted to purify him by empathy in the sacrament with his guardian. We are accused of "folk beliefs" that in this way demons, evil spirits and all kinds of "energy stickiness" were banished, and the animal was protected from rabies. It's clever - it's easily repeated by grandmothers ...

The "technology" of the sacrament presupposes that a skilled person hangs the dog horizontally (between Up and Down, Heaven and Earth), then brings it out of the "tame" to the "wild", swirling it as if it were a flame in a whirlwind until it comes out. the two loose ropes and flying in the air to the river below him, because in the dizziness of his ascent he will receive a new soul, so that - as soon as he comes out of the water - he will shake off the pathogenic "stickiness" and return purified as reborn to the fourth element - The Earth.

It is unlikely that in the sacred caves (and especially in the generally narrow dedication chambers) the sacrament with the initiates took place in this form. Thus the meaning of the rite of penetration as a goal and experience of mysticism was "translated" for mass use.

The ignorant, who are always more aggressive due to their lack of knowledge, set about eradicating the survivors from the custom, politically pitying the dogs. If they had read more, they would have known from the anthroposopher Rudolf Steiner that even St. John the Forerunner at the baptism of Christ in the Jordan River bet on a similar "barbarism" and it was when he pressed the head of Jesus under the water that the "Holy Drowned Previous Man" was inhabited by the Holy Spirit. From the prominent theologian of Constantinople Evtimiy Zigavin they could learn that even in the twelfth century the perfect among the Bogomils were considered ... "virgins", because

With the Bulgarian teaching they received the holy spirit

and they "gave birth" to the people around them - the meaning of healing, when the initiates restored the cosmic balance of man in the world through coexistence…

I am convinced that initiates have gone through much more complex and risky trials to achieve their ultimate goal. It cannot be a coincidence that most of the ancient "wolf dens", recognized by medieval followers as places for hesychastic monasteries, are usually elevated above deep precipices. An intrusive example is given by the caves-monastic monasteries on the periphery of the Madara plateau above the village of Osmar, above the village of Khan Krum, as well as the Albotin, Razboishki, Besarbovsky, Aladzha monasteries, etc.… But the Holy Place above Perushtitsa, recognizable in the rock sanctuary, is invaluable for its case: here the sacred river is clearly visible, which separates it from the "world" by sacralizing the space around it; the impressive dolmen just beyond it, built as an approach to the "wolf cave" for the asceticism of the neophyte mystics ("students"), before heading to the rocky hill, where they will be initiated into the supreme "wolf" sacraments by passing through the dolmen peak and they fly through it, tied with a rope, into the abyss, under which - low below - is the water, and on the shore next to it - the stone colossus, to which they leave their former "unawakened" essence „

Apparently, the "pop version" of the ancient magical rituals is based on a kind of psycho-emotional induction. Anyone who has had a dog knows that there is no more loyal friend than him. And who would be more devoted to man? Is there a nobler servant?

One would outgrow oneself if one were able to experience purification!

Now the police do not protect our villages from the insolent robbers who are destroying people's homes. But it is obliged to pursue the ancient custom of Strandzha people under the pressure of our famous politicians and other "environmentalists" for their disrespect for their people. Surely they too will succeed in destroying the last wolf mystery that survived the Thracian rites in the closed elite society of the Dacian Getae (ie, "wolves") like their predecessors, the communist commissars who took it in the middle of the twentieth centurythe firefighting by his hereditary priests, who "expose us to foreigners" and then turned it into a Balkan touring fire. Again, followers of imported foreign models brazenly dispose of ancient traditions that have survived in our lands since ancient times, and under such demonic supervision, even people with originally enlightened souls can not achieve harmony with cosmic energies, and once they stop, after two generations the rite can only to imitate ... 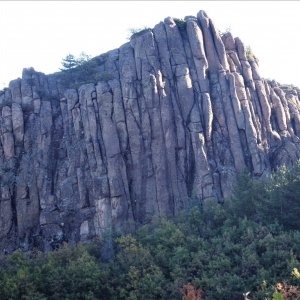