Home › Gone › Lecture on the life, feat and self-sacrifice of Spas Ginov

Lecture on the life, feat and self-sacrifice of Spas Ginov

The lecture on the life, feat and self-sacrifice of Spas Ginov was given by Kristina Vasileva - a guide at IM-Perushtitsa, to students from 6th and 7th grade at Petar Bonev Primary School in Perushtitsa.

In the second half of the 18th century a certain Gino from Tarnovo settled in Perushtitsa. What made him leave his hometown remains unknown. The newcomer Gino has two sons - Rangel and Nicola. They eventually marry and create a home and family. Rangel Ginov has a son Ivan, who too young married the beautiful Perushtitsa girl Kata Ripcheva. They were not very wealthy, but they were not poor either. They subsisted on viticulture and cattle breeding. One day while Ivan was grazing his cattle, his destiny smiled. He saw a hole in the ground, dug it up and found gold coins. He took them home and started counting them with his wife. They did not finish until they sang the first roosters. Thus Ivan Ginov became one of the richest people in Perushtitsa at that time. He buys new vineyards, gyul plantations, cattle, opens a soap factory and an oil mill. He became even richer and became the first person in the village not only in wealth but also in influence. His family lives well despite the heavy slavery. His wife Kata gave birth to five daughters - Lyuliana, Nikolina, Mitra, Bozhana and Maria. However, Ivan longs for a male child who will one day take over his business. He turned 50 and was just beginning to despair when fate smiled on him for the second time. A male child is born to him - they called him Spas.

Spas Ivanov Ginov studied at the Dan school with Dragan Manchov. He was studious, sociable, fair, direct, honest and boisterous. He had dignity, courage and fearlessness. From an early age he lived with Bulgarian songs, legends, tales and legends, which indicate their influence and patriotic impact on his pure soul. His fiery heart is illuminated by the idea of freedom. Fearless, self-sacrificing and dedicated. He does not know what bending, humiliation and cowardice are. His fiery soul overflowed with love for freedom.

He was married at the age of 15. They took the biggest beauty in the village of Giurgiu x. Todorova, who until his uprising gave birth to 4 boys and 2 girls. Spas started helping his father early, and later took over the whole business. He had the opportunity to live his life in days filled with peace and rare contentment, but fate decided otherwise. He failed to come to terms with slavery. More than once he beat and drove Turkish guests out of his house when they wanted his wife to serve them or when they did something obscene in the village. The Turks hated him, but they were also afraid of him.

Even before he turns 20, Spas takes over all the affairs of his father. He became very rich and became one of the influential people in the village. But wealth does not seduce him, does not blind him. He was a good husband and a kind father. He had 6 children: Rangel, Georgi, Dimitar, Yordanka, Galina and Ivan. The only desire Spas has is an hour to see his people free. That is why he did not spare health, resources, strength. He supported the school, the church and the community center. Although he was young, everyone respected and revered him. His demeanor showed that he had a strong character and even in difficult moments he maintained complete self-control.

He became a supporter of Petar Bonev. He was his right hand in preparation for the uprising and a generous donor of money for the supply of weapons and gunpowder. He was given a huge vote of confidence. He was elected treasurer of the revolutionary committee. In the winter of 1876, Petar Bonev and Spas Ginov began to prepare for an uprising more actively than ever. Efforts are focused mainly on arming the population. During the hectic preparation, Spas is in his element. There is no sleep for him, no peace. Days and nights merge into one. Everyone in the village takes part in the preparation. They bake bread, make rusks, sew insurgent clothes, pour bullets.

Shortly after the announcement of the uprising, Kocho Chestimenski arrived in Perushtitsa with his family. Together with Spas they are P. Bonev's first assistants. With the exception of most chorbadjii, almost the entire population took part in the uprising. Girls and brides cut their hair, put on men's clothes and came to the defensive positions to help. The children who carried water are not left behind either.

The uprising lasted 10 days - from April 23 to May 2. As a torrent, the enemies descend on the rebels, but encounter masculine resistance. P. Bonev, S. Ginov and K. Chestimenski are among the insurgents around the clock - they guide and encourage. There is no going back and there can be no going back. Everyone is ready to fight to the last breath. Unequal battles are being fought. Defenders are forced to retreat from their original positions. After fierce battles, the enemies take house after house, street after street. The pretty village has been turned into piles of rubble and ashes. The rebels chose to hide in the church "Arch. Mikhail ”, because at that time it was the most stable building. Its walls were more than 1 meter wide. There they sought salvation and trust from God. K. Chestimenski and S. Ginov were inside with their families. P. Bonev was in a soap shop a little further up the street. There an enemy bullet hit him in the forehead. His comrades set fire to the soap factory so as not to leave his body insulted by the Turks.

On this tragic day, somewhere in the field where P. Bonev's wife was hiding, his son was born. She named him after him, Peter, so that his name would not be forgotten and so that his child would take over the revolutionary baton handed down to him to continue the struggle. The last day of the uprising was decisive. The roof fell on the heads of the rebels in the church and many of them were killed and wounded. Then cries are heard - "should we not surrender?" But Spas Ginov refused to hand over his family alive to the Turks and decided to kill them himself.

All that is left in this world is his eldest child, Rangel, who was raised, studied and adopted by their relative Rangel Gichev. He worked as an agronomist for a long time, and in 1908. became mayor of Plovdiv. He spent his old age in Sofia, where he died in 1932. He left behind 2 daughters.

Spas Ginov has lived a very short 28-year life. He was crowned with a dignified death. He will live forever as long as there is Perushtitsa and Bulgarian on earth. 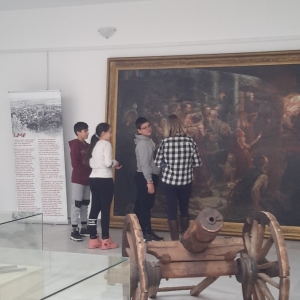