146 years of the April Uprising - Exhibition of works by Prof. Dobri Dobrev and Hristo Neykov 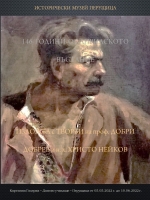 146 years of the April Uprising - Exhibition of works by Prof. Dobri Dobrev and Hristo Neykov

The exhibition consists of several cycles with works by the national artist Hristo Neykov, dedicated to the Bulgarian Renaissance, the life of our people during the Turkish slavery and the April Uprising, as well as sketches, drawings and oil studies for the painting "The Protection of Perushtitsa" by Prof. Dobri Dobrev. The works are a donation of Perustitsa Historical Museum.

The People's Artist Hristo Neikov /23.10.1929 – 1999/ was born in Sofia. He finished illustration at the Art Academy under Prof. Iliya Beshkov. In 1960, he became a member of the Board of Directors of SBH, in 1970, its vice-chairman, and in 1985 - chairman. He was repeatedly elected as the chairman of the "graphics" section. Works in the field of easel graphics, his preferred techniques being lithography, etching, drawing with chalk and ink. He also creates oil or watercolor paintings. Illustrated many books. He is the winner of the SBH award for illustration and the "Ilia Beshkov" award for caricature.

Prof. Dobri Dobrev /03.08.1927 – 2003/ was born in the village of Gorno Sahrane, Kazanlashko. During his studies at the National Art Academy in Sofia, he was taught by the famous Bulgarian artists Tsenyu Todorov, Iliya Beshkov and Dechko Uzunov. He completed his higher education in 1954, his thesis being his masterpiece "The Defense of Perustitsa", which depicts the tragic events during the last day of the April Uprising in Perustitsa. In the period 1956-1960, Dobri Dobrev was a teacher at the Academy of Arts, where he became a professor of painting in 1977. The subjects of his works are diverse - from portraits to historical subjects, landscape painting and figurative compositions. He is the winner of the "Creators of art and culture of Perustitsa" prize.