Home › Gone › 130 years since the birth of Konstantin Galabov

130 years since the birth of Konstantin Galabov 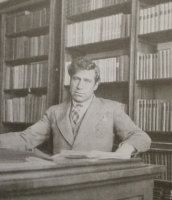 On the occasion of the 130th anniversary of the birth of Konstantin Galabov, the Perushtitsa Historical Museum will present an exhibition with posters about the life and work of the worthy Perushtitsa native from 04/16/2022 in the Conference Hall of Danovo School - Perushtitsa. "I was born in a heroic Peruštitsa, but there is nothing heroic in my life. I was only persistent in my work like all chickens. Hard work is my only pride.”

Konstantin Galabov was born on April 17, 1892 in Perushtitsa in the family of Spas and Spasa Galabov. His mother is a modest but powerful woman, a real housewife. His father was a teacher, one of the survivors of the rebellious spring of 1876, whose account of the April Uprising in Peruštitsa, written in 1883, is highly valued for its exceptional historical objectivity.

Constantine's childhood was spent among the wild nature of the Rhodopes and among the still-standing ruins and burnt-down homes of the April Uprising, which have become a heroic legend. This environment from an early age ignited his poetic imagination, inspired him for a lifetime.

Long before his literary element manifested, the lyrical flame burned his heart - he made his first literary attempts when he was only nine years old. His parents are puzzled, but neither hinder nor encourage him. In junior high school, despite missing one class due to malaria, he did not stop sending articles, essays and critical reviews to the newspapers "San Stefanska Bulgaria", "Balkanski Novini", "Grazhdanin" and also to the magazines "Uchitel", " Spiritual Awakening' and 'Enlightenment'. However, no one suspects that behind his pseudonym "Lelin" or simply behind "Mr. Galabov" is a thirteen-year-old student. Only when one of the editors decides to visit him personally does he realize that the gentleman is still a child, and still declares: "Let him send articles, we will print them."

Soon after, changes occur in the life of young Konstantin - the family is forced to move first to Stanimaka, then to Pazardzhik and finally to Plovdiv due to his father's various appointments for each new school year. In the city of Philip Konstantin, he entered the Plovdiv Men's High School, where a real creative and spiritual life was bubbling, polemics were conducted on all issues related to the modern in life, literature and even in politics. Among this conglomeration of ideas and influences, Konstantin searches for his way and finds orientation in the dramatic meeting of two cultures - the Bulgarian and the European.

In 1910, Galabov enrolled as a student of Slavic philology at Sofia University, but after the first semester, at his father's insistence, he left for Montpellier in France to study medicine. He soon realized that this was not his field and, after a fierce family dispute, he decided to take the next step himself - he left for Germany, where he enrolled at the University of Göttingen, choosing the majors "German Philology and Philosophy" and "History of Art with Archaeology". There he is fortunate to listen to lectures by some of the best teachers. He gave an essay on modern Bulgarian poetry, in which he came to the insight that: "we should not be proud of foreign flowers, but with Bulgarian ones - we should not give expression to a foreign national spirit, but to our own".

In the fall of 1912, Galabov voluntarily interrupted his studies and returned to Bulgaria to take part in the Balkan War that broke out. On January 5, 1913, due to health reasons, he was suspended from military service and again left for Germany to continue his studies. However, the war left a lasting mark on his work, because years later he himself exclaimed "the tragedy of Chataldja, Cherna and Kaimakchalan is greater than the tragedy of Batak, Peruštitsa and Bratsigovo. Our generation has experienced something far worse."

On April 30, 1914, Galabov enrolled as a student at the Christian Albert University in Kiel, where he successfully defended his doctorate on the attitude of Friedrich Schlegel and other German romantics to Goethe. The dissertation was completed in 1915 and published as a book in 1917. In 1915, Constantine left the university for the second time to fulfill his duty to his country again – this time on the occasion of Bulgaria's participation in the First World War. As soon as he arrived, he was sent to the front. Fate saved him – instead of being thrown straight into the midst of the fighting, he was detained further in from the front line, in the village of Levunovo (Blagoevgrad region).

After the war, he developed a feverish activity to make up for the lost, senseless and anti-cultural time during the most productive years for a young man. On November 11, 1918, already graduated, Konstantin Galabov was appointed as a German language teacher, initially in the First and later in the Second Sofia Boys' High School, where he taught until 1921. A new fruitful period began, in which Galabov wrote poems, literary articles and lead polemics from the pages of leading Bulgarian newspapers and publications. He was invited to be a contributor to the magazines "Strength", "Development", and from 1921 to the elite "Zlatorog", where he established himself as a person with strong creative ambition, as an indisputable connoisseur and judge, both a guardian of tradition and a regulator of the modern . It is on the pages of "Zlatorog" that his most talentedly written texts appear, in which he reveals himself as a true erudite, well oriented in the problems of modern literature.

On October 1, 1921, Konstantin Galabov was elected a regular lecturer in German at Sofia University. At the end of the year, he married Raina Boyanova, who on November 1, 1924 gave him two sons - Yavor and Stefan. The marriage turns out to be not very happy, because his wife remains alien to his spirit and intellectual aspirations and offers him only the "guild model - to remain a housewife". About his cohabitation with Raina Galabov, he says with sadness: "she cut herself off from my life." His first marriage was dissolved on October 27, 1947, and a year later, on November 17, he married his former student Zhana Georgieva Nikolova.

On March 5, 1923, Konstantin was elected associate professor, and later the same year, head of the Department of German Philology at Sofia University, which he successfully led until September 15, 1958. In his scientific work, Galabov had indisputable successes in the field of Bulgarian German studies. He created with a wide sweep, and the department led by him turned it into a multidisciplinary one - along with literature (old, middle, new and latest) and philosophy, Gothic, Old High German and Middle High German languages with grammar and interpretations of the texts are also studied intensively; New German grammar, syntax and phonetics. His students at that time could be counted on the fingers. Most of them are women, but all of them with a strongly emphasized spiritual aspect, love for science and academic discipline. Since 1931, Konstantin Galabov has been a full professor and head of the department he created. In 1940, his book "The Uprising of Heroic Peruštitsa" was published, in which valuable information was collected about the feat of the people of April, who wrote with blood the brightest pages in the history of winning Bulgarian freedom. Recognition of his activity as a scientist and writer is his awarding by H.V. Tsar Boris III on May 21, 1939 with the high distinction "Commander's Cross". For his scientific works and achievements, the Christian Albert University in Kiel awarded him a "Golden Doctorate" on the occasion of the 50th anniversary of his doctorate in the Faculty of Philosophy.

The period after September 9, 1944 brought new misfortunes to Konstantin Galabov. Accused of being a "fascist professor", he miraculously survived a partisan bullet in his native Peruštitsa. On November 15, 1944, Galabov wrote a letter to the Minister of Public Education, Stancho Cholakov, in which he tried to remove the terrible accusation from himself with the words: "I have always been a supporter of the idea of Slavic brotherhood and a worshiper of the great Russian people, to whom we owe freedom". The letter marked the beginning of a decade-long voluminous correspondence with the new government. Galabov valiantly defends both himself and the Department of German Philology, considered a nest of foreign propaganda by the communist government. A new attack comes from Hristo Gandev, dean of Sofia University, who prepares a devastating description of colleague Galabov, in which we read: "He is an irredeemable reactionary in teaching and research work, openly demonstrates his reluctance to reform, openly fights against progressive science, has an anti-pedagogical attitude towards students, does on various occasions smaller or more significant political demonstrations against the government, strengthens the reactionary student body in the major. A rude and unbalanced person... To be freed!". Thus, Galabov found himself in isolation and lost positions in the department - he was deprived of the right to give lectures, hold seminars and assign grades for the subjects he teaches. Despite the restrictions, the matter reached the office of Prime Minister Valko Chervenkov, where it turned out that the attack launched by the dean of the faculty against him was not fully supported. On May 3, 1955, Galabov himself sent a letter to Chervenkov asking him not to be fired. There is no answer, but the invisible machinery of power is set in motion from this "highest place," because Konstantin Galabov continued his teaching activity for another 3 years, when, by a new order of the Minister of Education and Culture, he was "relieved from his position due to the age limit, as of September 15, 1958." But the tough Peruschenet did not give up even after this news. This is followed by a request to Todor Zhivkov with only one wish – to be allowed to work in the department of German philology, which he himself created. After six years of agonized waiting and restlessness, on November 15, 1964, the Presidium of the National Assembly allowed Galabov to resume work as a part-time professor.

In 1974, after publishing the "Bulgarian-German Phraseological Dictionary" (1958), together with Zhana Galabova, as well as the capital teaching aids: "German Grammar" (1949), "Introduction to the Study of Gothic, Old High German, Middle High German and Early High German" (1953) and "Historical Grammar of the German Language" (1955), comes his official recognition by the new authorities, who award him the Order of "Cyril and Methodius" 1st class and "Red Banner of Labor" for overall contribution to the field of German studies.

Konstantin Galabov suffered a ridiculous accident when, on an autumn day, he was hit by a car on the street in 1980 in Sofia, on his way to the station and his native Perushtitsa. He was rushed to Pirogov, where he gazed at Nativity Peak.

Spas and Spasa Galabovi with their children Constantine, Smaragda and Dove 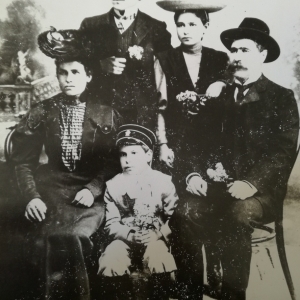 Constantin with his sister Smaragda 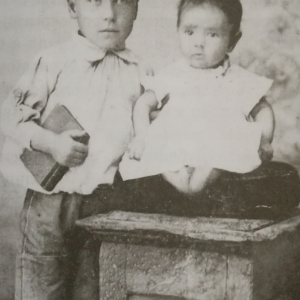 With friends in Plovdiv 1908 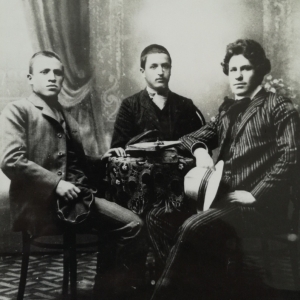 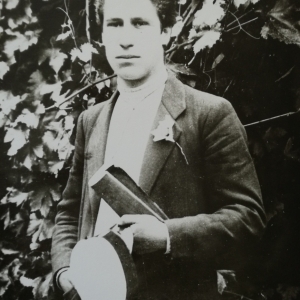 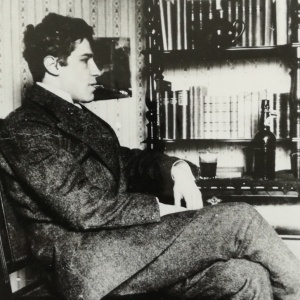 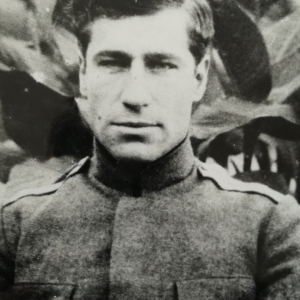 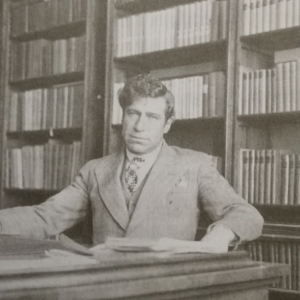 With his son Yavor 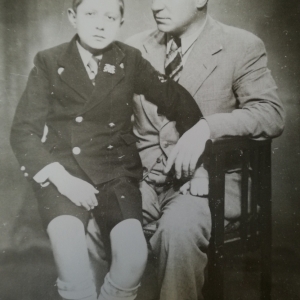 Mother Spasa with her grandsons Yavor and Stefan 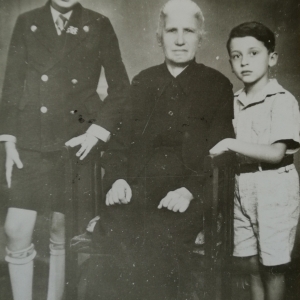 In front of the church "Saint Michael the Archangel" in Perustitsa 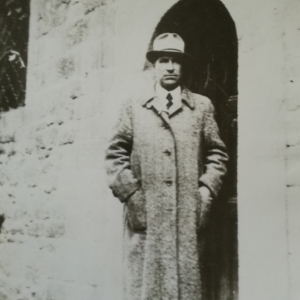 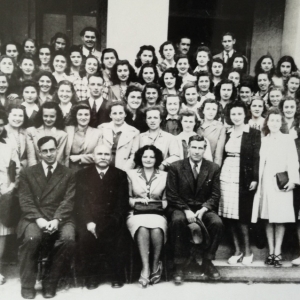 Students of germany filologi, 1947, and his second wife Jana 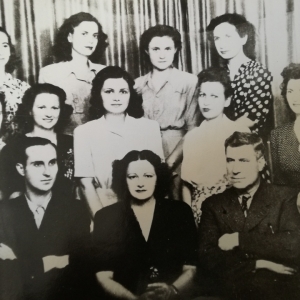