Home › Art Gallery › The portrait in the Middle Ages

The portrait in the Middle Ages

The portrait in the Middle Ages

Precisely according to the theory of development of the world and society in a spiral, the portrait in the Middle Ages borrowed from past trends, adapting them to their beliefs and requirements. During this period in Europe, almost everything was directly or at least indirectly related to Christianity and the church. In the period 5-15 century, the church was practically the only place where art and spirituality in general developed.

The word "icon" is of Greek origin and means "image", "portrait". It originated in Byzantium in the 4th century and spread throughout the Orthodox world. Initially, this was the name given to any image of the Savior, the Mother of God, a saint, an angel (individually or in a group), or events in the history of the faith and the church.

According to church tradition, the first icon was the non-manufactured image of the Savior. The ruler of Edessa, Prince Avgar, hearing of the countless miraculous healings that Christ performed, sent a painter to paint it. But his face shone so brightly that the painter could not. Then Christ washed his face and wiped it with a cloth on which his divine face was imprinted.

In the Orthodox Church there is the concept of "canon", which regulates the composition and themes of Scripture, depicting the proportions of figures, the general appearance and expression of the faces of saints, their overall appearance and posture, color palette and painting techniques.

St. Dimitar on the throne

St. Our Lady of Oranta

Any depiction of volume is undesirable because it emphasizes the bodily to the detriment of spirituality. The landscape is absent, and if there is, it is extremely conditional, flat and unreal.

Assumption of the Virgin

The golden background symbolizes the divine glory, it radiates light, but it is impenetrable. "Although MU's actions reach us, His essence remains inaccessible," says St. Basil the Great.

The proportions of the figures known from antiquity are disturbed. The figures rise up, thin to disembodiment, the fingers lengthen, everything hides under the folds of clothing, the type of which is also strictly defined.

The oval of the face lengthens. His forehead was painted high, his nose and mouth narrow and small, his eyes large and almond-shaped. The look is stern and carried away. As a "mirror of the soul" it emphasizes the eyes and mutes others, "more earthly" and from time immemorial associated with sensuality facial features.

Gold and silver as a symbol of divine light, white - the purity of Christ, green - youth and vigor, red - imperial dignity, but also the blood of Jesus and the martyrs - this is only part of the color code of the icon. It is also reflected in the clothing. The veil of the Mother of God is usually burgundy red and the dress is blue. In Christ the cloak is blue and the chiton is cherry red

St. The Mother of God - Affection

Removal from the waist

Revival icons break or bypass the canon, a landscape appears, realistic images of the horses of the saint warriors, full-blooded faces of the depicted donors (donors), even the artist himself, later even baroque elements brought from Europe. The earliest sign of the Renaissance spirit can be seen in the images of Sevastocrator Kaloyan and his wife Desislava from the Boyana Church, but due to the late Bulgarian revival the true renaissance appears in the works of various painting schools.

Mural by Sevastocrator Kaloyan and his wife Desislava

Holy Mother of God - Life-giving source Self-portrait of Zahari Zograf from the Bachkovo Monastery Murals from the ceiling of the dining room in the Bachkovo Monastery And so - the icon is an image, a portrait, an image, a personification. In the Old Testament, the word is used to mean something with a being that is honored. In the New Testament, there is a meaning of an image - an image on a coin, an image of God, etc., that is, there is a meaning of something that looks like a real object or object, something that represents you.

The portrait in Central and Western Europe

In the medieval art of Europe does not know the portrait in the modern sense of the term, that is, "a vividly authentic image of an individual human face." Artists in this period did not seek to achieve a living resemblance of the image to the original. The principle of "imitation of nature" is foreign to the historical nature of the Middle Ages. In the 4th and 5th centuries we noticed a transition from the Roman portrait to the characteristics of the Middle Ages - loss of portrait resemblance, emphasis on the eyes.

The features of the portrayed almost dissolve into the iconic "impersonality", becoming something like a symbolic portrait. Nothing new under the sun - let's remember the so-called "kalokagatia" in the ancient Greek classics, where everyone is equally beautiful. Until the emergence of a certain naturalism in Western European Gothic, medieval portraits were far from documentary.

The portraits differ mainly in dress and regalia, the faces are purely canonical and could belong to any saint, biblical or evangelical Persian

The ideology of the church allows the image of an individual in only two types of monuments:

1. Ritual - joining sacred images as a memory of a deed pleasing to God

In this case, the portrait similarity is neither a means nor an end, the image could be completely conditional and compensated by attributes or inscriptions.

In the first category are most often images of emperors, kings and monarchs in general, as well as spiritual hierarchs - popes and bishops, ie important defenders of the church, donors and guardians of piety. In early Christian iconography, they are depicted alongside Christ and saints as participants in a sacred liturgy. The cult of the emperor's power is closely connected with the Christian cult. Sometimes he receives his crown from the hands of Christ himself, as God's favor Christ crowns Roger II Mosaics in San Vitale, Ravenna

In the later period, those in power occupy a far more modest place, going to the narthex or to the choirs. The emperors are already bowing at the feet of Christ, praying for protection. Their very presence in the church is to remind us of the divine origin of secular power, but far more indirectly.

In Gothic, the portrait became a more complete and successful phenomenon. Naturalism is inherent in him and this naturally affects the image. A common feature of art, but Gothic is the interest in a vital credible transmission of the human image. Pendulum principle after such a long period of conditionality and lack of personification. The earliest this naturalism is manifested in the round sculpture.

Sculptures from the portal of Chartres Cathedral.

Tombstones with their specific genre features also allow the portrait to be preserved and developed.

Medieval tombstones (such as the royal tombstones in Saint-Denis) are an example of evolution in the genre. Initially, the figures have young faces, conditionally depicted and enlivened by the standard "Gothic smile", strikingly reminiscent of the smiles of sculptures in archaic, ancient Greece. Towards the end of the 13th century the situation changed, individualization appeared. It is believed that at this time sculptors began to use so-called "posthumous masks".

The birth of the true portrait genre in the late Gothic period is due to the spiritual awakening of Europe, which began in the late 12th century. Gothic is in crisis and in deep need of change, and therefore actively adopts the realism of the "third", penetrating Italy, initially suppressing the Proto-Renaissance, but eventually managed to enrich it. Thus, in the second half of the 14th century, it penetrated France and beyond the Alps and was adopted by local art. Here are the main centers:

Italy, the papal Avignon, became a center from where Italian influence spread to Catalonia, northern France, England, the Czech Republic, and southern Germany. This is how the so-called "international gothic" appeared. Easel portraits and miniatures appear.

Portrait of John the Good

The Franco-Flemish circle created picturesque portraits, but at the same time portrait sculptures. Unlike intimate and chamber paintings, sculptural ones are rather official and representative.

Portrait of Louis II of Anjou

Portrait of Duke John the Fearless

Statue of Charles V and his wife Jeanne of Bourbon

In the Netherlands in the 15th century, the rapid development of cities and culture led to the decline of court art centers with their inherent sophistication. The masters concentrated in the cities, and this led to the active development of the portrait genre. Oil painting emerged.

And so in the 15th century it was from the Netherlands that the Northern Renaissance, the younger brother of the Italian Renaissance, came. Mankind is ready for them, and these two separate hearths, from which the European portrait starts, deserve a special presentation, with or without looking for parallels between them. 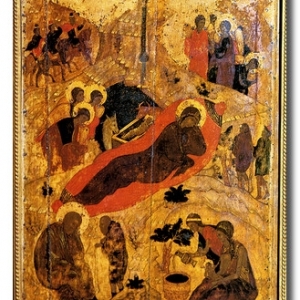 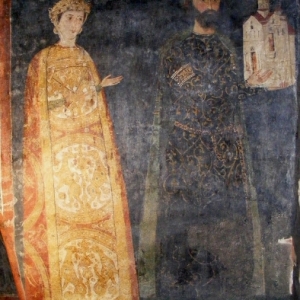 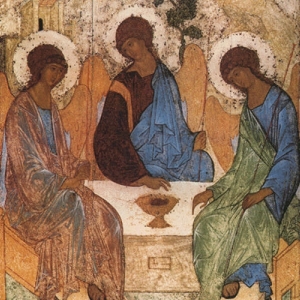 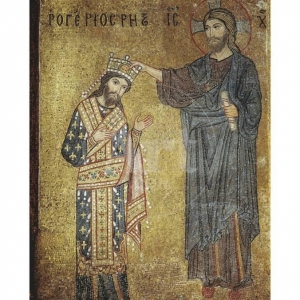 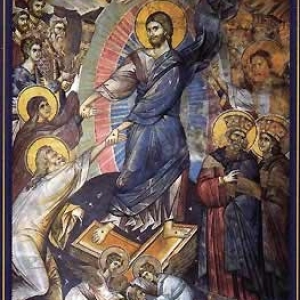 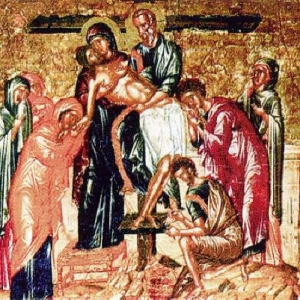 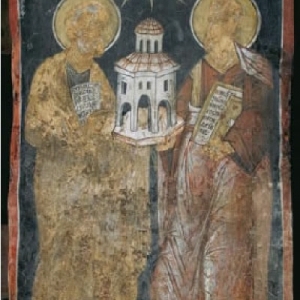 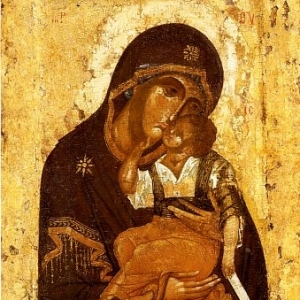 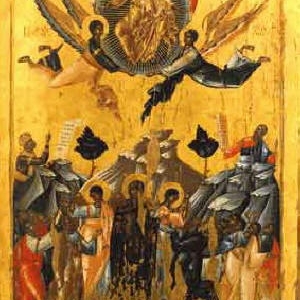 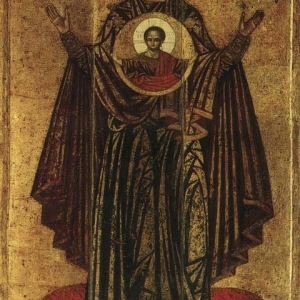 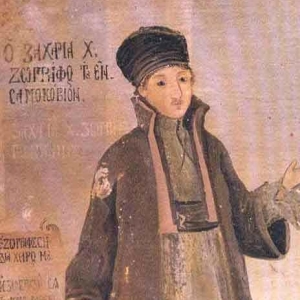 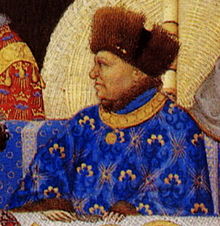 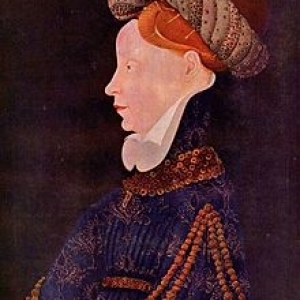